Paul Kevin Jonas II (born Thursday, November 5, 1987, in Teaneck, New Jersey), also known as Kevin Jonas and K2, is an American musician and actor. He was born in Teaneck, New Jersey, and grew up in Wyckoff. He is of Irish, Italian, Cherokee, and German descent. He is a member of the Jonas Brothers, a pop-rock band he created with his younger brothers Joe and Nick. The Jonas Brothers originally started with a solo singing career for Nick Jonas, but when Joe Jonas and Kevin sang backup for him, the record producer liked their sound and signed all three of them.

In 2008, he appeared in People magazine's list of the Sexiest Men Alive.

He married Danielle Delesea, a former hairdresser, at Oheka Castle on December 9, 2009. Jonas met Delsea in the Bahamas in the summer of 2007. They have a Yorkshire Terrier puppy named Riley. 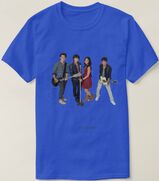 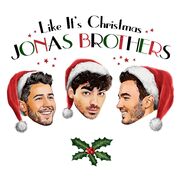 Add a photo to this gallery

Kevin Jonas was born in Teaneck, New Jersey, and grew up in Wyckoff, New Jersey. His mother, Denise (born Miller), is a former sign language teacher and singer, and his father, Paul Kevin Jonas, Sr., is a songwriter, musician, and former ordained minister at an Assemblies of God. He is of Italian (from a great-grandfather), German, Irish, English, Cherokee, and French-Canadian descent. He has three younger brothers, Joe (born 1989), Nick (born 1992) and Frankie (born 2000).

In early 2005, Columbia Records' new president, Steve Greenberg, listened to Nick's record. While Greenberg did not like the album, he did like Nick's voice. After hearing the song "Please Be Mine", written and performed by all the brothers, Daylight/Columbia Records decided to sign the three as a group activity. After being signed to Columbia, the brothers considered naming their group "Sons of Jonas" before settling on the name "Jonas Brothers".

The Jonas Brothers' third studio album, A Little Bit Longer, was released in the United States on August 12, 2008, and peaked at #1 on the Billboard 200.

On June 16, 2009, the brothers' fourth studio album, and third release under Hollywood Records, entitled Lines, Vines, and Trying Times was released. The album peaked at number 1 on the Billboard 200 with 247,000 copies sold. It was announced on May 1, 2012, that the Jonas Brothers parted ways with their record label Hollywood Records, and bought the rights to their music.

On February 28, 2019, the Jonas Brothers announced via social media that they were reuniting. They released their first new song on March 1 titled "Sucker".

Kevin Jonas is the only Jonas Brother who doesn't sing.

guitarist; and Joe played the lead male role and lead singer, Shane Gray. A soundtrack for the movie was released on June 17, 2008. The movie premiered on June 20, 2008, in the U.S.A., on Disney Channel, and Canada, on Family. Production began on the sequel, Camp Rock 2: The Final Jam, io September 2009, and the film premiered on September 3, 2010. The Disney Channel reality short series, Jonas Brothers: Living the Dream, premiered on Disney Channel on May 16, 2008. The show, which ran until September 5, 2008, documented the brothers' lives on the Look Me in the EyesTour. The name was inspired by their hit song When You Look Me in the Eyes. The series was renewed for a second season that premiered on March 21, 2010.T he second season followed the band on the European leg of their World Tour 2009. He and Joe, Nick, and Frankie starred in their own Disney Channel Original Series, JONAS, which premiered May 2, 2009. The show was renewed for a second season that premiered on June 20, 2010, as Jonas L.A., centering on the three brothers on summer vacation, in their Los Angeles vacation house with Stella and Macy. Jonas appeared on MTV's fourth episode of When I Was 17 (Season 1), talking about his memories from when he was seventeen. Kevin Jonas 'guest-hosted on "Live with Kelly" on December 13, 2011, making him the second brother besides Nick to have the honor of doing so. He co-hosted the show a second time on July 4, 2012. Starting on August 19, 2012, Kevin will appear in an E! reality series alongside his wife Danielle and his brothers. Produced by Ryan Seacrest, "Married to Jonas" will document the young couple's domestic life as well as the brothers' recording efforts as they prepare to release their newest group album.

Jonas married Danielle Deleasa, a former hairdresser, at Oheka Castle on December 19, 2009, with his brothers Joe and Nick as his best men. They met while on vacation with their families in The Bahamas in 2007. On their wedding day, he gave Danielle a real pair of glass slippers as a wedding gift. The couple had their first daughter, Alena Rose, on February 2, 2014 (Age 5) and their second daughter, Valentina Angelina, on October 27, 2016 (Age 2).

Retrieved from "https://jonasbrothers.fandom.com/wiki/Kevin_Jonas?oldid=4672"
Community content is available under CC-BY-SA unless otherwise noted.